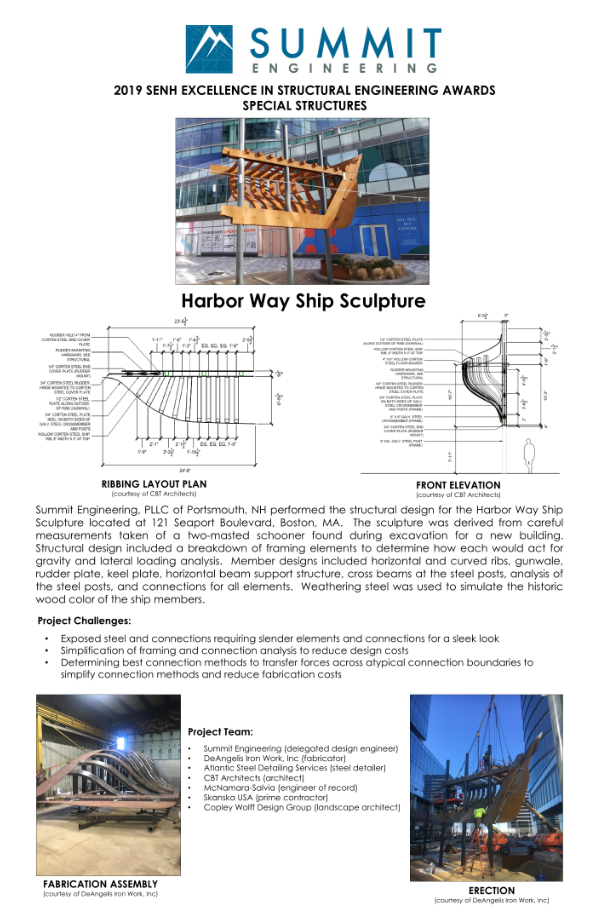 BACKGROUND
In May of 2016 a portion of a ship’s hull was discovered under about 20 feet of fill during the excavation for a new Skanska USA (Skanska) building at 121 Seaport Boulevard in Boston, MA. The 47-foot portion of the two-masted schooner that remained was preserved in the clay of the tidal mudflats that was filled in the late 19th century to create the land that makes up much of the Seaport District of South Boston. There is more historical perspective regarding the find, with maps and images, on the City of Boston’s Archaeology Program website.1

A sculpture of the ship was selected to be a central feature in a new public promenade within the Skanska USA Seaport complex of buildings. The open-air exhibit includes details, such that the ship that departed from Rockport, Maine, was transporting barrels of lime on “its final voyage to Boston”. 2

DESIGN
Summit Engineering, PLLC (Summit) of Portsmouth, NH, was contracted for the delegated structural steel design for the sculpture to be performed by the steel fabricator DeAngelis Iron Works of Easton, MA (DeAngelis). The prime contractor, Skanska, sub- contracted with DeAngelis for the custom metal work.

DeAngelis performed the fabrication on the basis of the drawings prepared by Atlantic Steel Detailing Services LLC of Salem, NH, and the structural engineering of Summit and in accordance with the contract documents and miscellaneous metal specification prepared by the project architect, CBT Architects (CBT) of Boston, MA. The sizes and locations of the various components in the sculpture and support framing, as presented in the CBT detail and layout plans, were developed from 3-D imaging information gathered by the archeologists and surveyors. The design team involved in the overall promenade and sculpture design included the landscape architect from Copley Wolff Design Group (CWDG) and the structural engineer of record from McNamara -Salvia. Summit provided the structural design, modeling and calculations submittal packages for approval by the design team and the prime contractor, with the final submittal package sealed by Robert R. Champagne, PE on November 21, 2017.

Summit’s engineering effort for the ship sculpture began with a breakdown of framing elements to determine how each would interact with the other for gravity and lateral loading analysis. The purpose of this review stage was to determine a method and order of analysis. A comprehensive 3D model was not created for this project; however, RISA 3D was used to analyze each element individually. Design loads considered Dead, Live, Snow, Ice, Wind on Ice, and Wind. Seismic forces were considered in the preliminary design stage; however, these were found not to govern and were excluded from final design. Wind forces were considered in multiple directions due to the asymmetrical structure. There were as many as 23 load combinations considered.

Components of the structure included horizontal and curved ribs, gunwale, rudder plate, keel plate, and the horizontal beam support structure framing to the cross beams and the three vertical steel posts. The various components of the sculpture were comprised of flat and built-up ASTM 588 “weathering steel” plate. Framing members were analyzed, considering the gravity and multi-directional lateral loads as noted above. Member curvature was considered where present, specifically for the horizontal and curved rib elements. Curvature was considered by breaking continuous elements apart and designing for splice connections. Connection design was performed between all framing elements, including splice connections and connections to the supporting steel posts structure. Summit analyzed and recommend changes to the sizes of the posts and how the sculpture was to be connected to the posts in order to reduce the eccentricity of the forces acting on the support points.

One particular connection that proved especially difficult was for the rudder hinge plate. This was comprised of steel cut-out plates to sandwich the rudder plate to the supporting steel seat angle that was welded to the keel plate. As the rudder plate was to remain static, the gravity and wind forces applied shear and moment in multiple directions that were developed through bearing and welds across the supporting connection. These reaction forces were then analyzed about the keel plate at their respective locations. This introduced torsion into the keel plate for which forces had to be resolved into the supporting beams and steel posts. The objective in the design process was to maintain a small efficient connection between rudder and keel plate for a slender appearance, while providing sufficient strength and minimizing cantilevered rudder plate deflection.

The steel ship sculpture was completely fabricated in shop and lifted into place as one assembly onto the vertical supports already in place on the promenade of the Skanska development in South Boston. 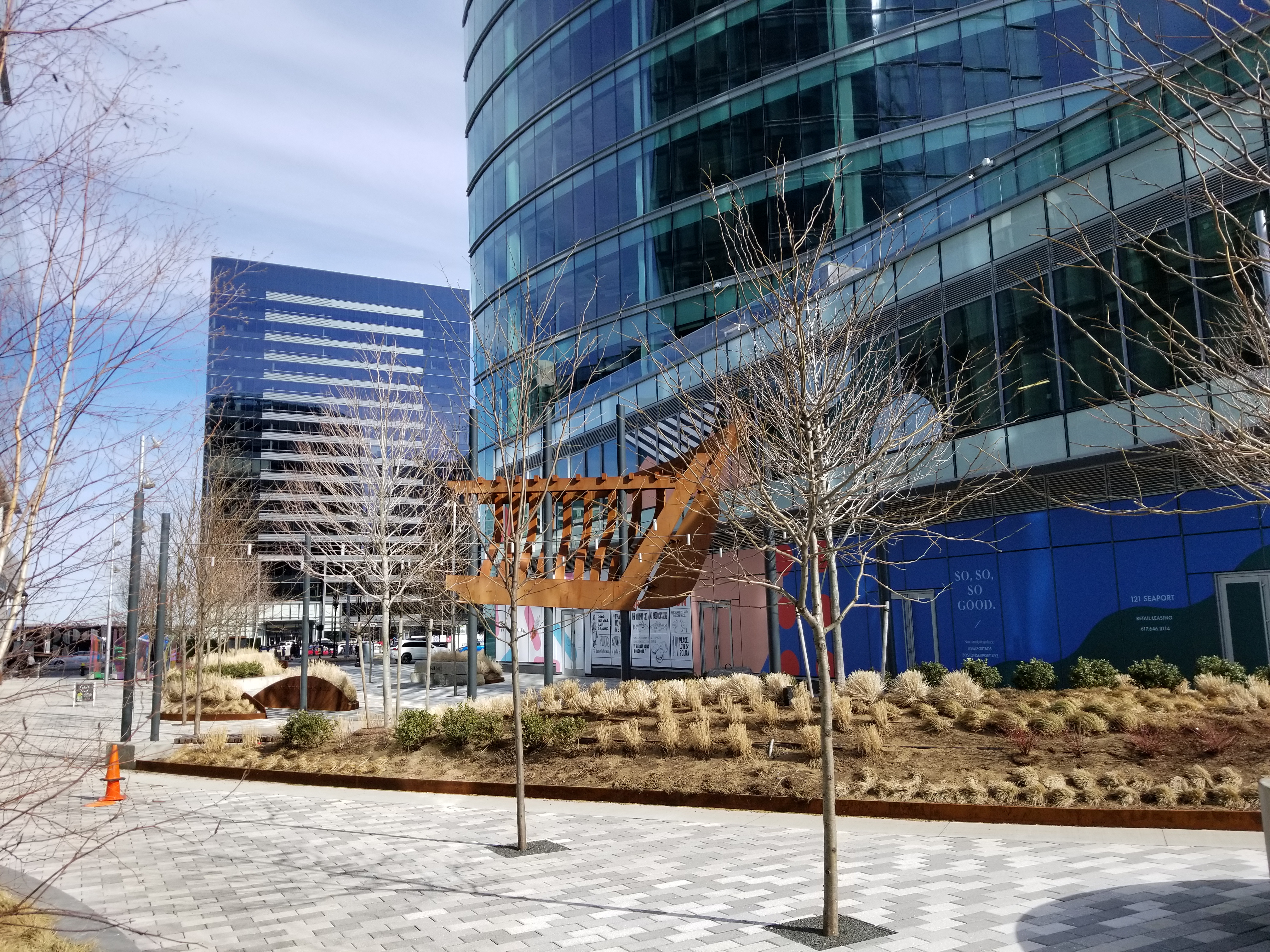 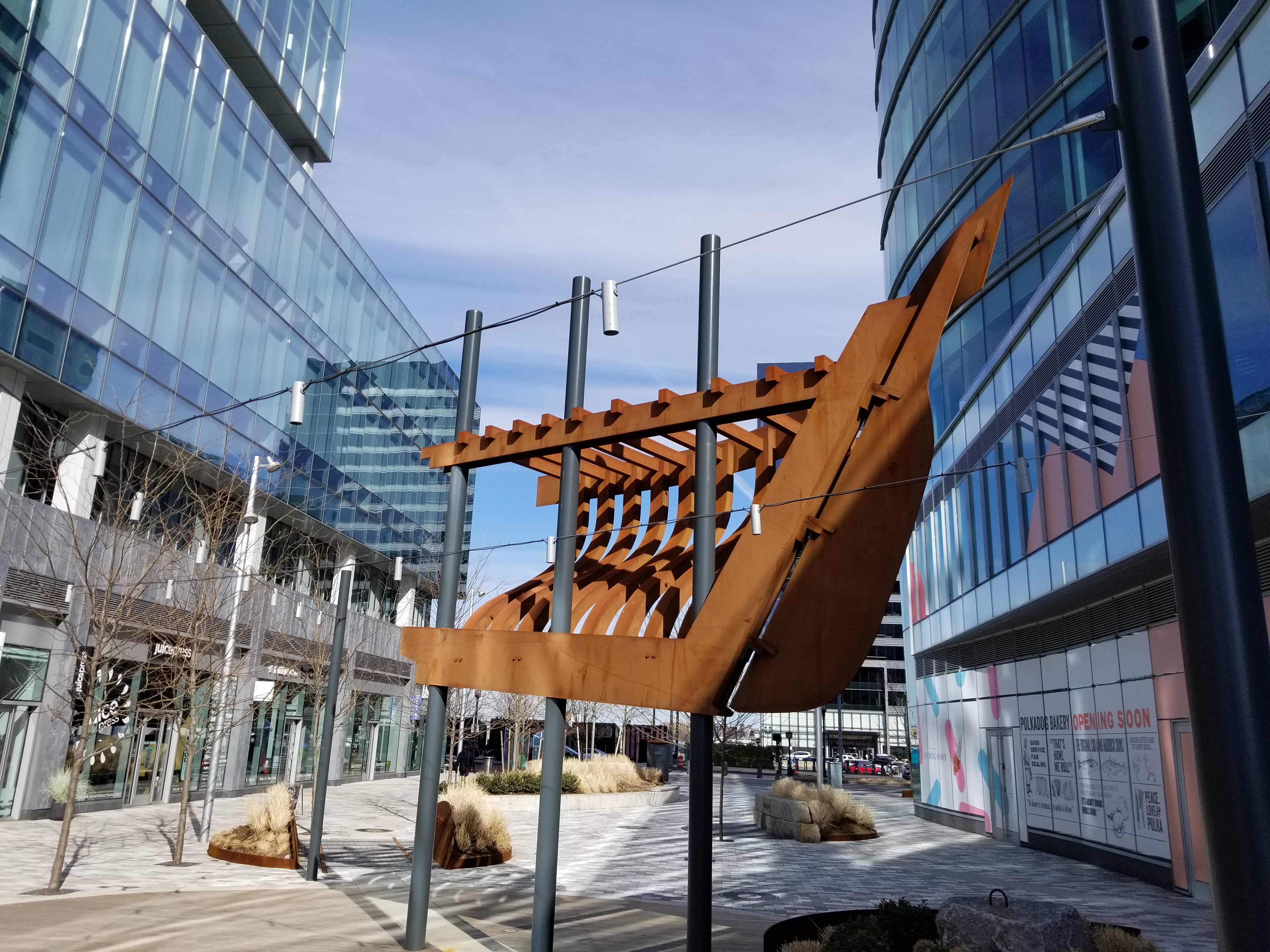 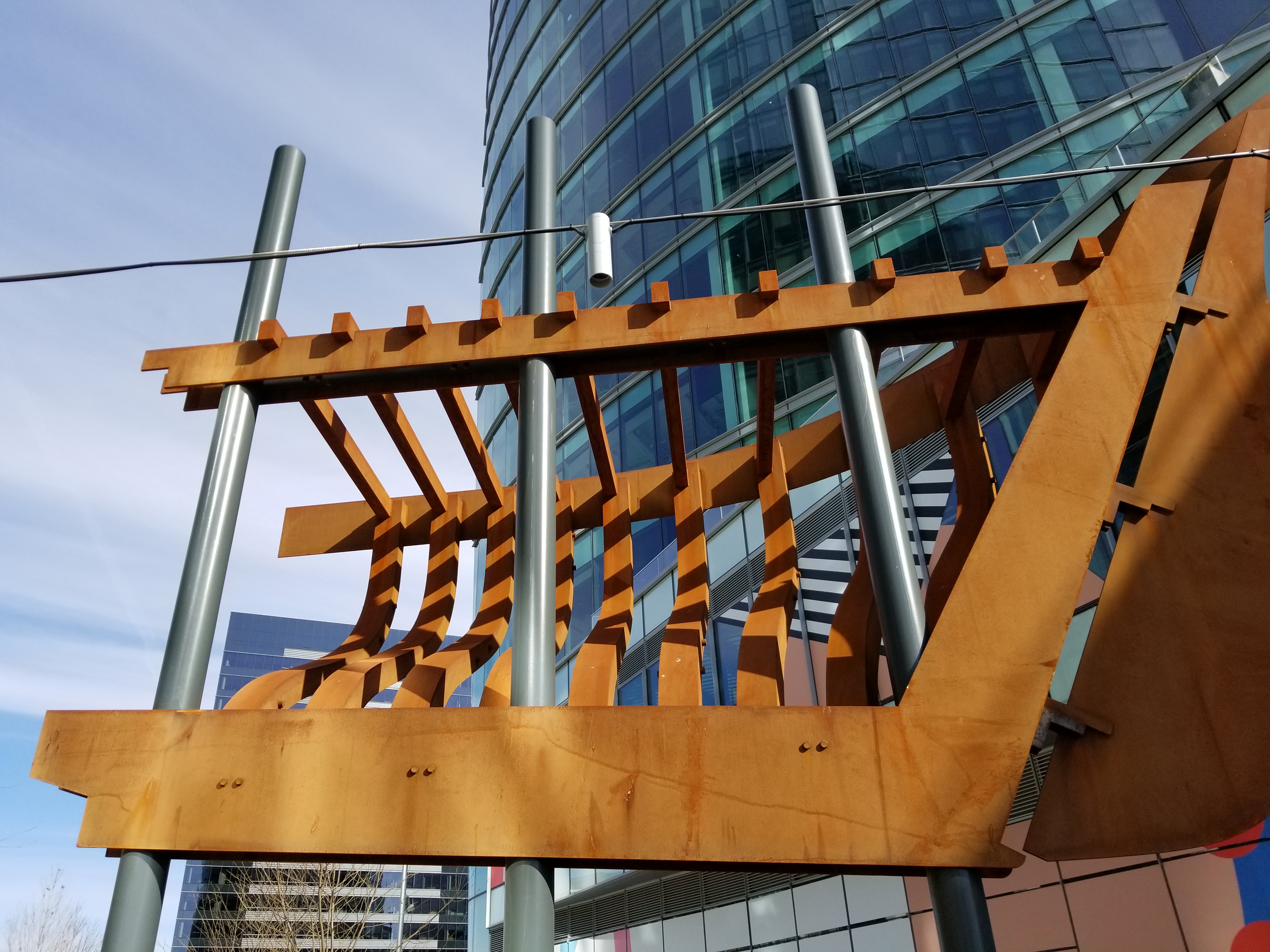 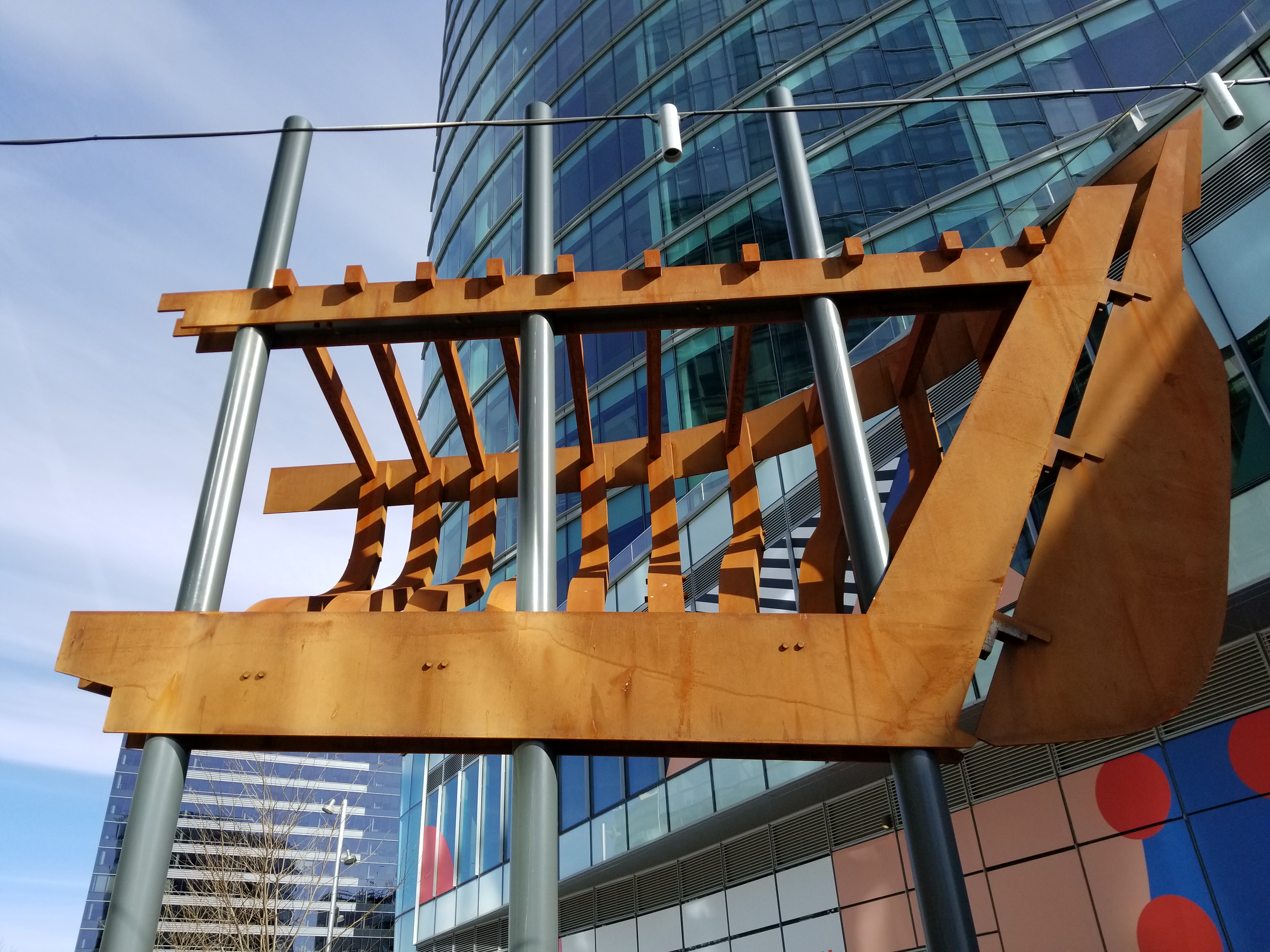 2. “The Shipwreck Unearthed in the Seaport Will Live On As an Exhibit”, Buell, Spencer, 2017 June 16. Visit Boston Magazine for more on the shipwreck sculpture.

Visit SENH.org for more information about their Excellence Awards program.