Brick Engineering – Common Challenges and How To Fix Them.

Brick masonry is a ubiquitous building material—it has been around for ages and continues to be a prominent building material today. Applications range from old mill buildings to modern building veneers. But while brick masonry is known for its strength and its outstanding performance, brick walls require consideration in terms of maintenance and upkeep.

Here is a list of common brick engineering problems that can be remedied with the proper action:

Parapets are one of the most failure susceptible building features. Wind loads can be extremely high on parapets as they receive wind loading from two directions (front and back). Wind-driven rain can also cause problems to parapets from both directions.

Brick parapets can start to tilt for several reasons. Older brick and mortars are highly susceptible to moisture expansion. Over time, if one face of the wall continues to get wet (think snow) and does not dry as much as the other side, the parapet can expand upward while the other side does not expand or expands less. This will eventually result in a pronounced curving parapet. Unlike brick walls at or below the roof framing, there are no other structural elements to ‘hold’ an expanding parapet in place or to help resist any movements. The expansive forces from moisture and temperature can also act in the horizontal direction. Forces can build to a level where the parapet ‘buckles’ and bows (typically outward). 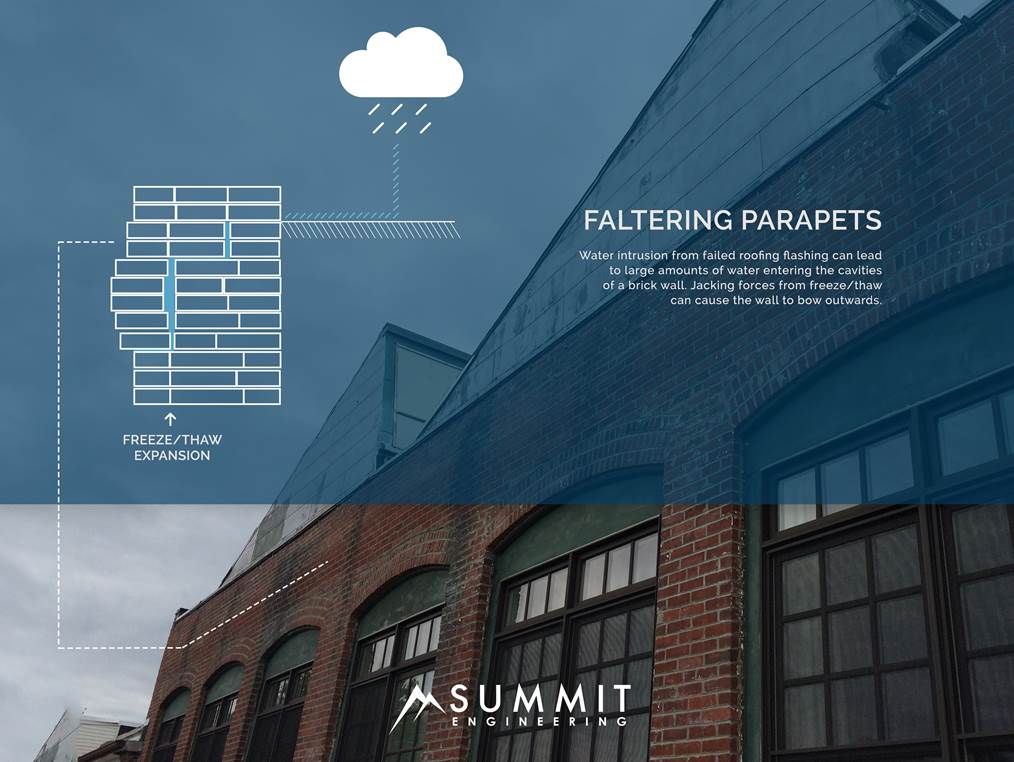 An equally troubling, source of faltering parapets is water intrusion from failed roofing flashing. Improper maintenance of roofs can lead to large amounts of water entering the cavities of a brick wall. Jacking forces from freeze/thaw can cause the wall to deteriorate and/or lean.

Both of these conditions will require some level of wall reconstruction. Proper flashing details and a regular maintenance/inspection program can minimize the extent of damage.

Brick walls can be thought of as hard sponges. Older brick masonry is traditionally more absorptive than new brick. Bricks can absorb rain water and then ideally release it back into the air (through evaporation) when the sun comes back out and relative humidity drops. This process requires that the brick can ‘breathe.’ The brick has to allow the release of the absorbed water. Coating brick with an improper product, e.g. a urethane-based coating, can cause a buildup of moisture in the wall. Pressure will form behind the coating and try to find its way out. Often, the pressure will be released by failure of the coating. Paint will peal from the building leaving large amounts of debris at the base. If the moisture remains trapped in the wall and temperatures drop, damage from freeze/thaw could occur. 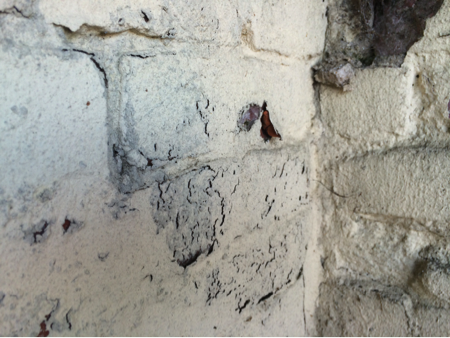 It can be acceptable to paint most brick. Ideally the brick is evaluated for its susceptibility to water saturation and a correct coating chosen. Coatings should be silane or siloxane based products that chemically bond to the substrate, yet provide vapor permeability. Other coatings work well, but these two perform the best. If the brick has been determined to be highly susceptible to freeze-thaw damage, other avenues should be explored.

Walls with improper coatings should be stripped using mild paint removers. In some cases, where portions of the coating are difficult to remove, soda blasting may be employed. All options should first be tested in a less obvious location where fine-tuning can occur.

It is disappointing to think about a well-intentioned property owner spending the money to repair a brick masonry wall by repointing it, only to have the repointing cause problems with the wall. Unfortunately, this happens a lot.

Mortars have improved immensely over the years. It used to be that brick was very strong and mortars were weak because the prominent and only available materials were lime mortars or natural cement. It wasn’t until the discovery of Portland cement did we achieve the ability to produce mortar strengths nearly as strong as concrete. In this case, stronger is not better. Brick walls are like stacked Oreos. The brick is the wafer and the cream filling is the mortar. Older buildings lasted a long time because as foundations settled or strong winds blew against tall walls, the brick could absorb the movements due to the flexibility of the mortar (cream filling). This mortar also acted as a sacrificial capillary pressure release.

We often see buildings that have undergone a repointing with severely damaged bricks. The photos below shows brick walls with distressed bricks surrounded by Portland cement mortar joints. 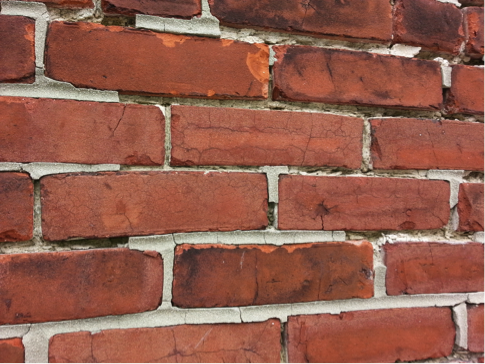 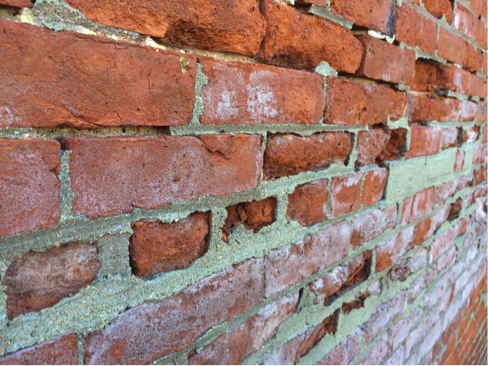 Another repointing mistake is the use of rotary disc grinders to remove the outer layer of deteriorated mortar. This is more of a problem in older historic structures where mortar joints can sometimes be at thin as 3/16-inch. Rotatory grinders can scar the surrounding brick forever damaging the look. The National Park Service standards for historic preservation recommend a pneumatic air chisel for precise removal of mortar.

Unfortunately, it is hard to reverse damage due to improper repointing. Undamaged areas should be corrected as soon as this type of failure is identified. If the damage occurs in highly visible locations, it might be possible to harvest brick from less conspicuous areas.

There is never a single answer for every project. Hiring a structural engineer familiar with material science is the surest method to both repair older buildings and prevent damage on new ones.

At Summit Engineering, we are both structural engineers and building scientists. We’re here to help you on your next brick restoration project or answer any questions you have about brick masonry engineering in general. Be sure to watch for Part 2 of Brick Engineering 101, as well as future blog posts where we will discuss proper mortar materials and mixing.