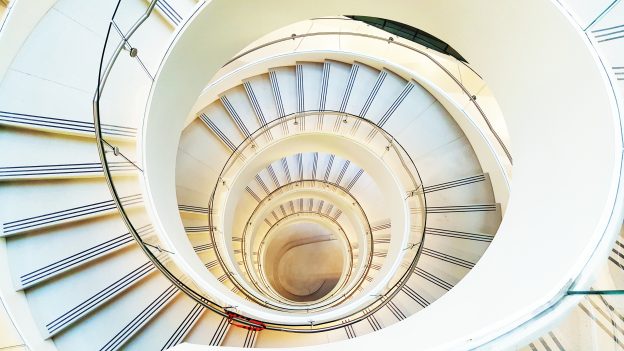 Summit Engineering was contracted by the steel fabricator DeAngelis Iron Works of Easton, MA on the design of this multi-level spiral stair. Payette, the architect of record and Lemessurier Consultants, the engineer of record were involved the overall building design. The stair design was provided as a deferred design submittal. Limited graphical information was shown on the original design drawings and was the basis of design for the completed structure. Summit Engineering provided all of the design, modeling and calculations submittal packages for approval by the design team.

Design of the spiral stair initially began with an examination of the geometry. Each flight, from floor-to-floor, comprised an interior and exterior radial steel plate stringer with steel bent plate treads and multiple intermediate landings, trapezoidal in plan, and supported at each level by an A-frame cantilever frame element. The initial intent was for a continuous bent plate tread system in which adjacent treads would be welded to one another to sufficiently transfer moment longitudinal to the stair providing for multi-axis plate bending. The preliminary design found this layout had insufficient strength and stiffness, requiring a substantial increase in tread thickness and tread-to-stringer weld. At this stage, steel tubes were introduced beneath the bent plate treads to provide increased rigidity and to serve as primary frame elements to transfer forces between the two stringers. The addition of these elements increased the rigidity and allowed the system to respond increasingly as a single unit. The steel tubes provided the additional benefit of increased stiffness, and allowed the adjacent treads to act independently, thereby reducing cost associated with fabrication and erection.

The interior and exterior plate stringers, constructed of similar material, have different stiffness due to the geometry of the stair. Stiffness is indirectly proportional to the coil diameter, which relates to the diameter of the stringers in plan. Considering each plate stringer to act as a spring with regard to vertical loads, and considering a vertical slice through each respective plate stringer, the interior stringer has greater stiffness than the exterior stringer. To provide for an efficient design, the steel tubes at the treads were employed to increase rigidity and thereby transfer load from the exterior stringer to the interior stringer. Stiffness is also important for the dynamic response of the stair. Per “Slender Monumental Stair Vibration Serviceability”, Davis and Murray, 2009, the recommended minimum natural frequency is 5 Hz. Increasing stiffness allowed for this minimum to be achieved. Verification of this criteria required modeling for the dynamics of the structure.

Additional design elements include finite element analysis (FEA) of radial glass guards and the design of steel railings, the A-frame support structure at each floor level, connections for all elements of the stair, and rigging support structures for the stair lowest flight. The glass guards are trapezoidal in elevation and radial in plan; both dimensional characteristics were considered in the FEA model. The stair lowest flight is comprised of radial stringers, dissimilar from the radial stringers at the upper floor. The reactions for the stringers at the lowest flight were resolved into a steel floor plate with anchors to the concrete slab-on-grade. 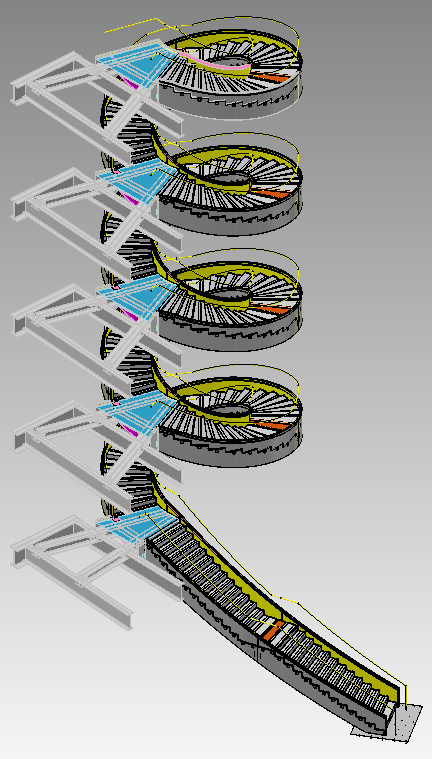 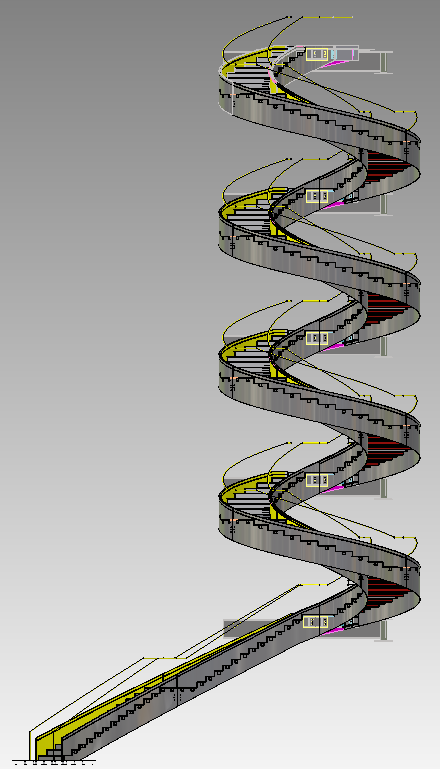 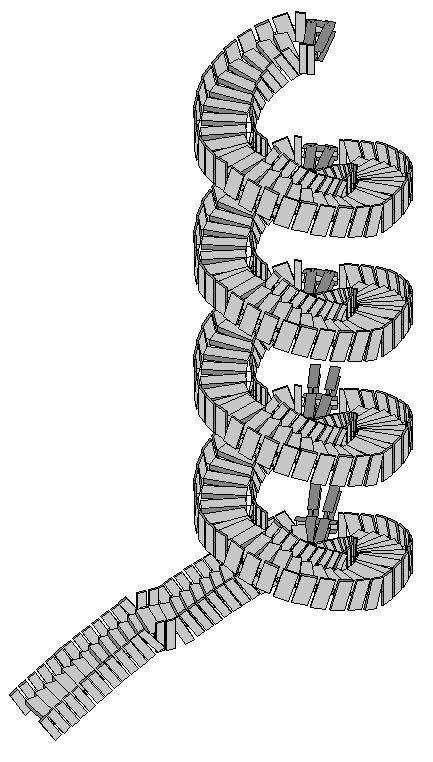 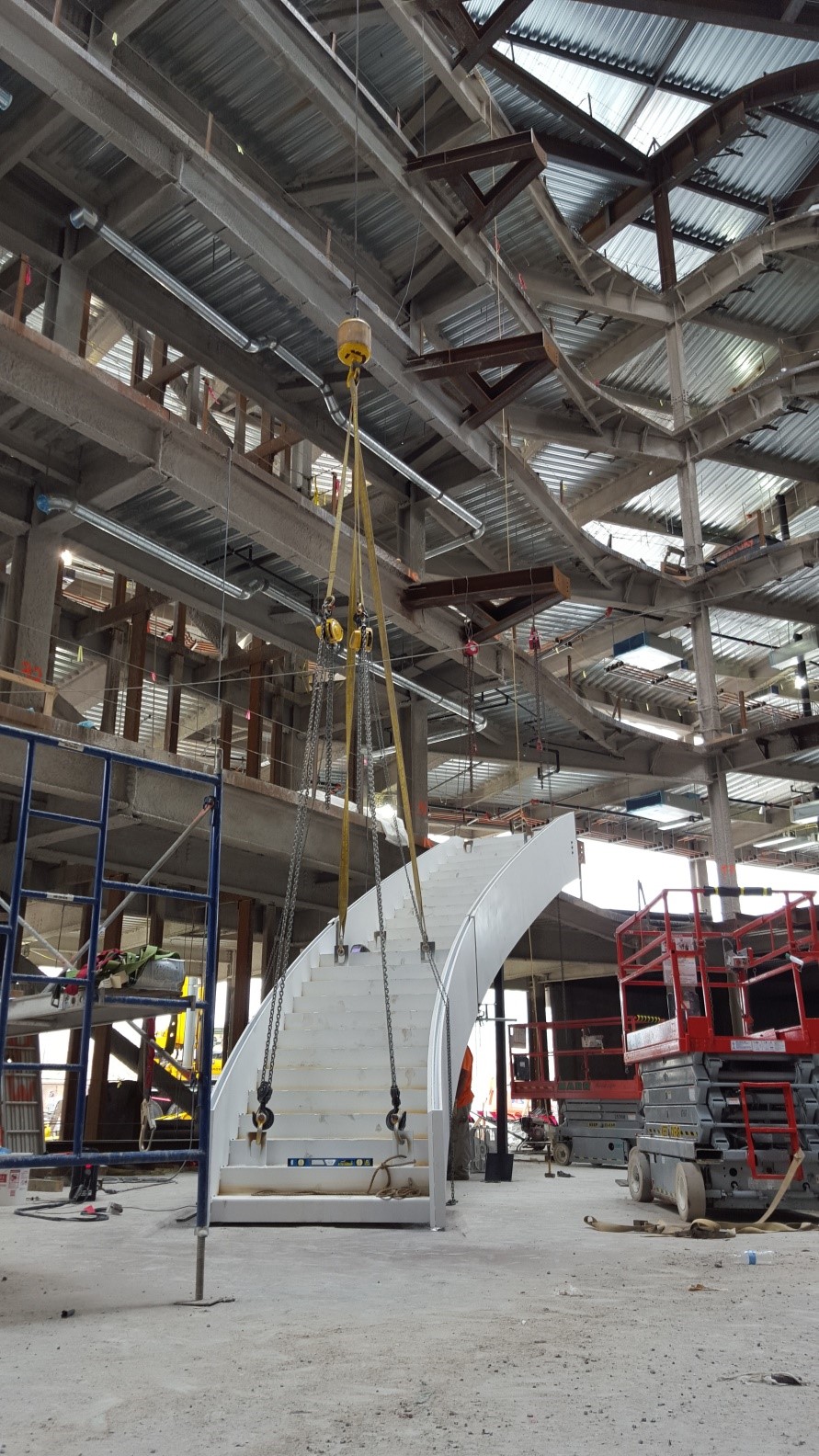 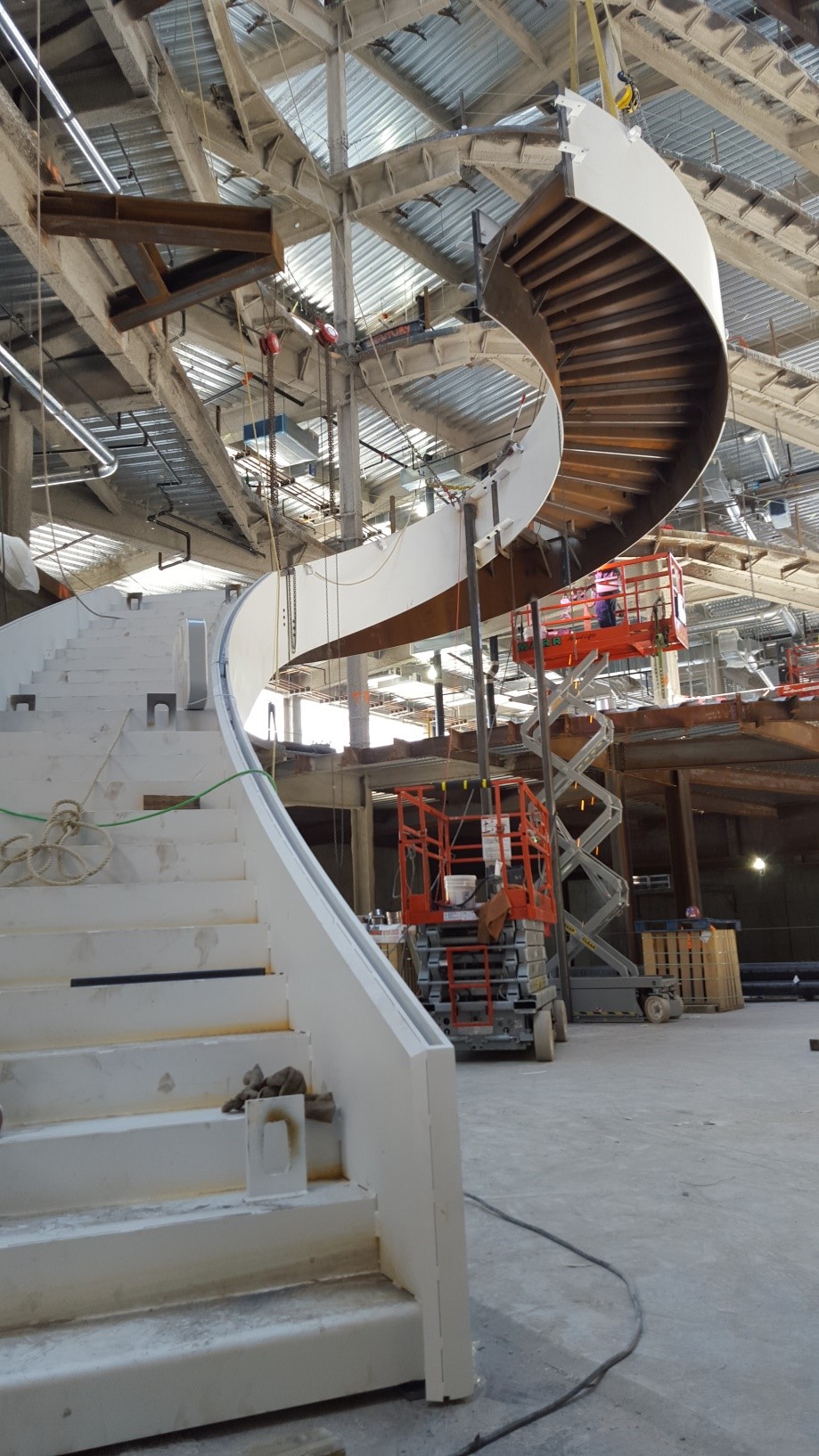 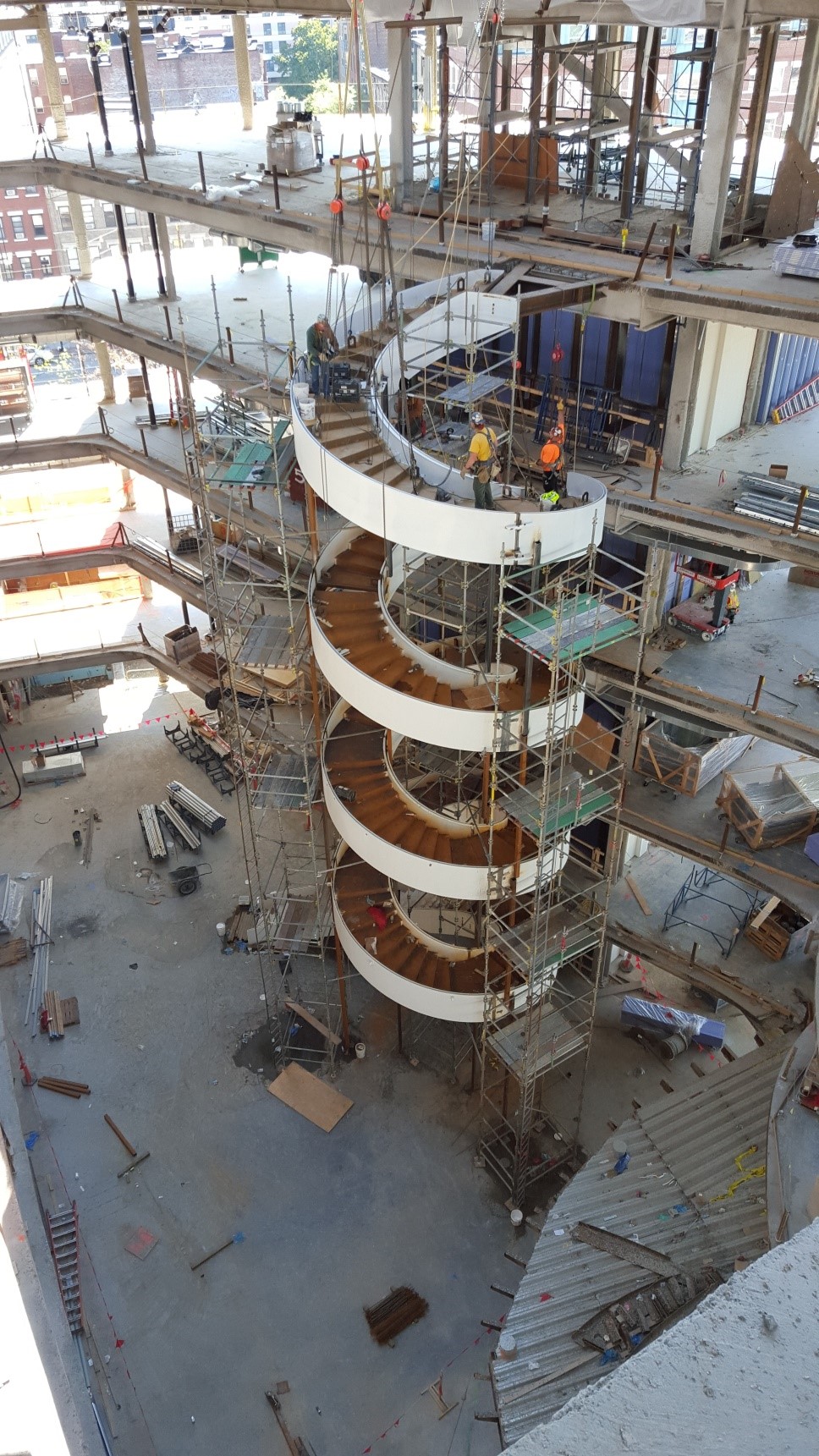 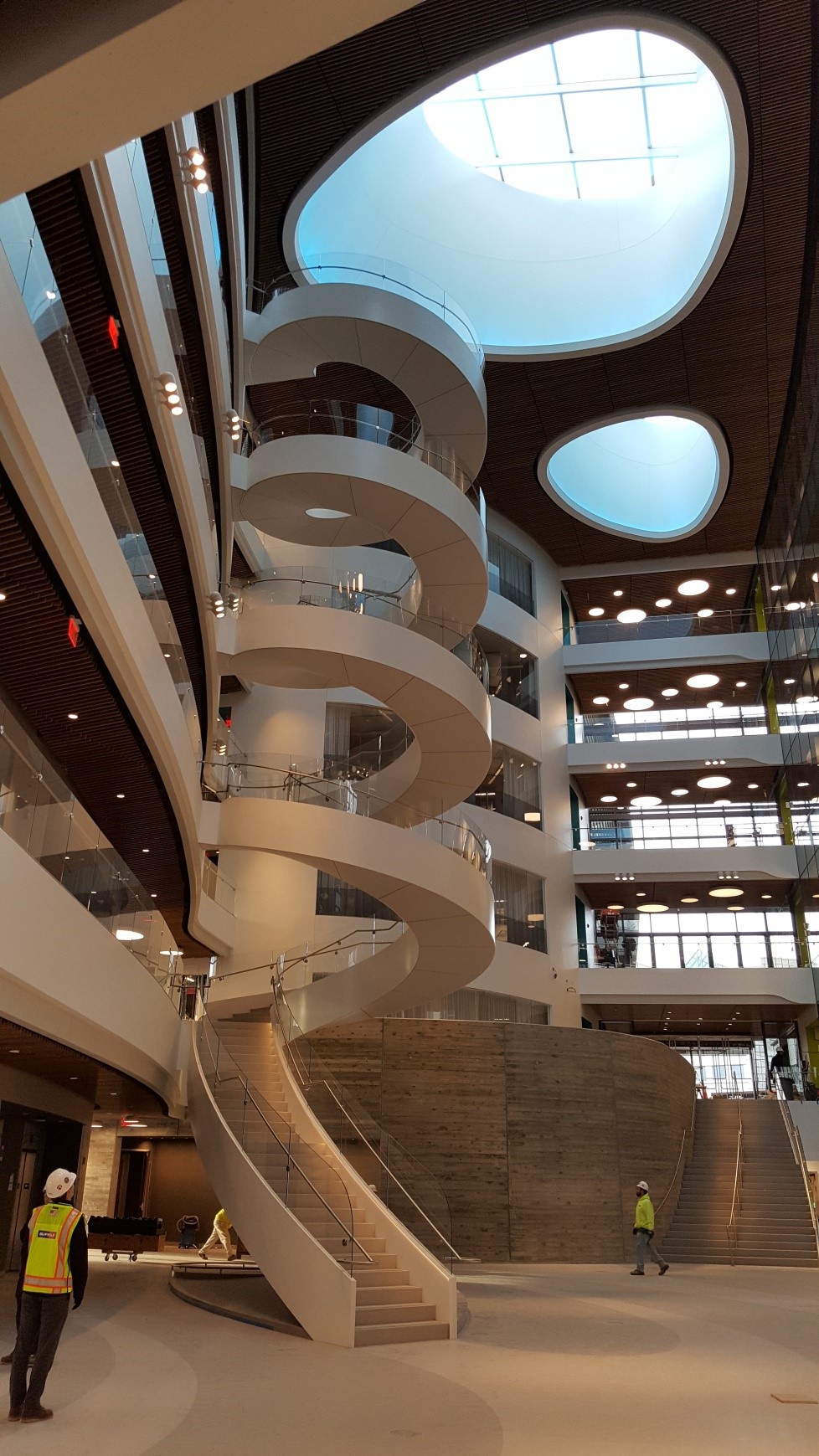 Visit SENH.org for more information about their Excellence in Structural Engineering Awards program.