"Summit Engineering has consistently
provided us with practical designs with quick
turn-around times."

Building in a Flood Zone? Why You Should Conduct a Flood Risk Assessment Before Building

When building in a flood zone, it’s crucial for a property owner to conduct a proper flood risk assessment – no matter if it’s residential, commercial or industrial land. This assessment is crucial in determining whether a property is at risk of flooding. It can also have a major impact on the overall design of a structure in question.

The Federal Emergency Management Agency (FEMA) has two designations for coastal flood zones within the 100-year flood plain — A Zones and V Zones. Each are subdivided into specific categories to further designate different conditions. In general, one can think of A Zones as locations that will flood, but the floodwaters will mostly rise and then slowly recede. Large waves, higher than 3-feet, are not to be expected in A Zones. Picture the filling and emptying of a bathtub. The second category — V Zones — implies “Velocity.” It means forces from the movement of water will be significant. Picture large waves crashing against a foundation.

Though A Zones are mostly thought of as stagnant water, initial flooding or receding floodwaters can cause scour against building foundations or other structures. Scour can be a factor in all flood zones. As mentioned previously, each zone has its own sub-designations and subtleties that we attempt to explain below.

(Note – The terminology beyond this point can get confusing. FEMA and most consultants (engineers and architects) will often refer to either an A Zone or a V Zone. They may be referring to the difference between the two. However, they may also be referring to the designated A Zone as opposed to the AE Zone. This document will refer to them as A Zones when we mean to differentiate it from a V Zone. We will refer to it as an A Zone (highlighted) when we mean to separate it from the AE Zone.)

All of the A Zones require that the top of the lowest floor (including the basement floor) be constructed above or at the Base Flood Elevation (BFE). This requirement is for new, substantially modified, or substantially damaged structures. Foundation walls below the BFE must have flood doors or other openings to allow for the equalization of hydrostatic pressure on both sides of the wall. Since floodwaters will enter the level below the BFE, inundation of this level will occur and there may be resulting damage. (Note – FEMA provides additional guidance to go beyond minimum code requirements. Besides the obvious benefits of reduced possibility of damage during flooding, there may be reductions to insurance premiums.)

A Zones do not publish BFEs on the Flood Insurance Rate Maps (FIRMs). This is because these areas have not been fully investigated for flood hazards. FEMA has authorizing language in both the International Building Code and the International Residential Code for a local official to require an applicant to determine the BFE from other sources.   If resources are available to the project, a specialized flood study can be performed on the subject property. If no sources are available and the local officials do not require a determination of a BFE, then best flood management practices must be followed.

AE Zones are listed on the FIRMs with the BFE in parenthesis. The BFE is in reference to the FIRM datum. The FIRMs are usually overlaid on top of a USGS survey map and the relevant datum information can be found in the title block of the FIRM. Structure elevations should be set with the aid of a Licensed Land Surveyor (LLS). Most communities will require that a LLS or licensed engineer provide a FEMA Elevation Certificate to document the elevation of the lowest floor. FEMA requires that communities participating in the National Flood Insurance Program (NFIP) maintain records for all structures in a Flood Zone.

All V Zones, in addition to large wave forces, bring with them more rigid design requirements. These requirements pertain to the siting, elevation of the lowest floor in relation to the BFE, the design of the foundation, enclosures below the lowest floor, and alterations of sand dunes. V Zones are subject to “coastal high hazard flooding”. Usually, these zones are pretty small in size.

Structures in V Zones must be sited on the landward side of the mean high tide, not just above it. Removing sand or vegetation may only be carried out with approval from the floodplain official. All buildings must be elevated on piles, posts, piers, or columns to a height where the bottom of the lowest horizontal structural member is at or above the BFE. The space between the piles or posts must remain free of obstruction. (Breakaway walls or open latticework qualify.) The foundation must be designed by a licensed engineer or architect to resist flotation, collapse, and lateral movement due to the effects of wind or water loads.

VE Zones are the most common of the V Zones. They have replaced zones formerly designed as V1-V30. FIRMs older than 1986 will still list the zones as V1-V30. Structural fill may not be used in any VE Zone for structural support.

V Zones, like A Zones, do not have published BFEs on the FIRMs. These areas have not been fully investigated for the appropriate BFE. If resources are available to the project, a specialized flood study can be performed on the subject property. If no sources are available and the local officials do not require a determination of a BFE, then best V Zone flood management practices must be followed.

The design of foundations for structures in V Zones can be challenging. Piles must be designed for combinations of gravity, wind, seismic, and wave action forces. Depth of scour must be considered. Any breakaway walls beneath the first floor must be specifically detailed. Consultation with a structural engineer familiar with Coastal Construction practices and codes is critical for a successful project.

Summit Engineering would be happy to assist you on your next project.

Want to learn more about Summit? 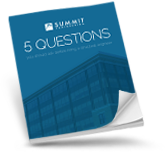 5 Questions to ask before starting your project.